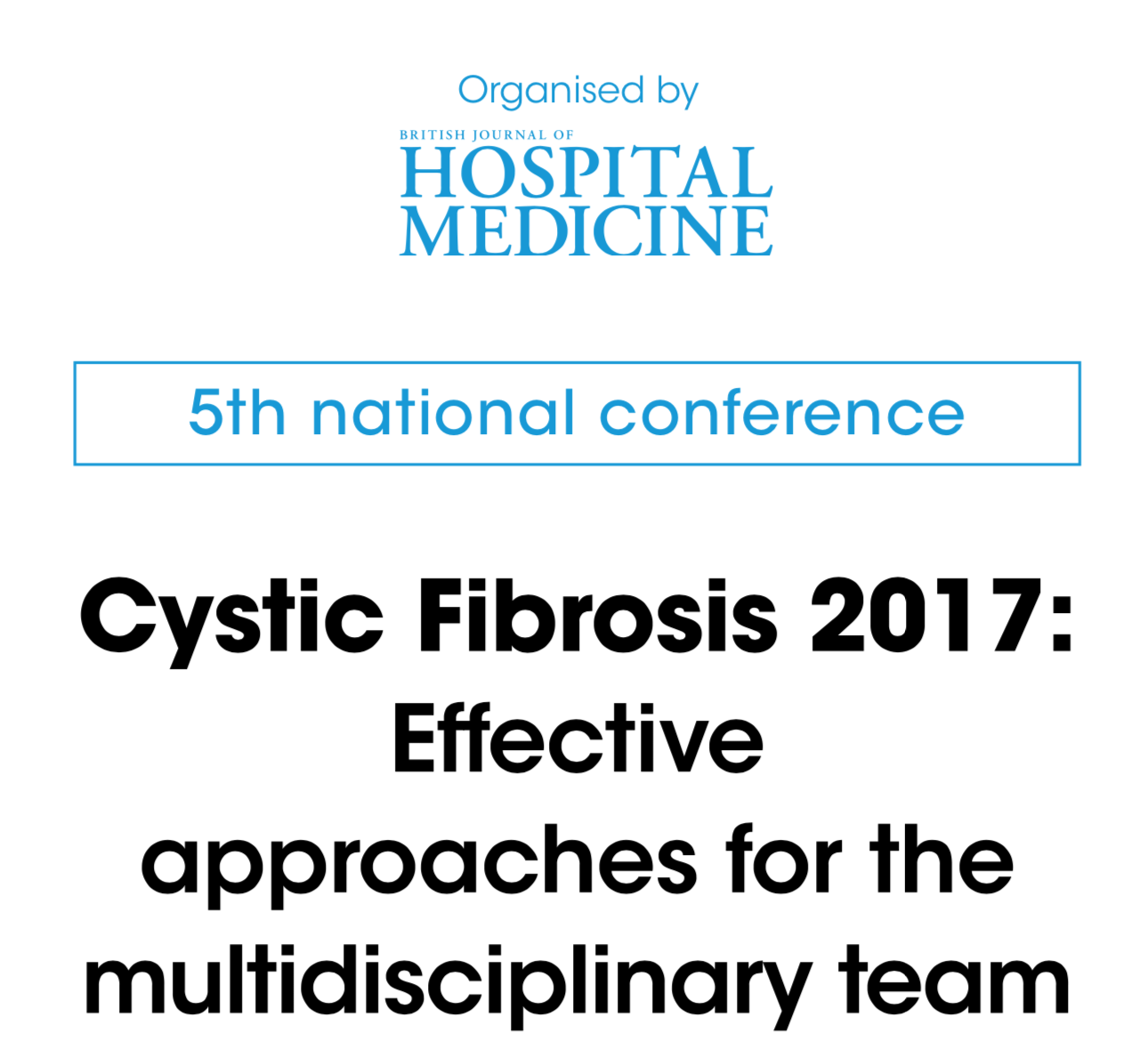 CF Guernsey recently sponsored the presence of Rosemary Kealy, the Islands only adult respiratory nurse specialist, at the most recent CF Conference to be held in London. Her report follows.

Since 2013 Ivacaftor has been used for classification II, V & VI CFTR, providing a treatment option for 8% of the CF population (G178R) which is still poor.  Since then other medications have been introduced in combination Lumacaftor with Ivacaftor E56K, Tezacaftor E193K and a triple therapy F1052U, D1270N.

At present DF508 is the largest mutation effecting 75% of people with CF in the UK, currently treatment is Ivacaftor which acts at the cell surface with Lumacaftor which acts at the gate on the cell.  This combination therapy is also known as Orkambi, which is not available on the NHS as it cost per QALY is £290,000 (The quality-adjusted life year or quality-adjusted life-year (QALY) is a generic measure of disease burden, including both the quality and the quantity of life lived. It is used in economic evaluation to assess the value for money of medical interventions). Qrkambi became available in 2015 and could be used to treat ½ the CF population.

In 2017 Tezacaftor & Ivacaftor was realised, it gained US Food Drug Administration (FDA) approval and still needs European Medicines Agency (EMA) approval, the prediction is that 90% of CF could be treated with modifying drugs.

These are all things that are widely known in CF medical circles… so what’s next?

VX-440 is the next generation corrector being developed by Vertex Pharmaceuticals.  When combined to another CFTR corrector (tezacaftor, VX-661) VX-440 has the potential to enhance the amount of CFTR protein at the cell’s surface.  At present VX-440 the current clinical program is studding the triple combination of VX-440/tezacaftor/ivacaftor and data of this study is being generated by Galapagos Company (A biotechnology company specialized in the discovery and development of small molecule medicines with novel modes of action, with a pipeline comprising Phase 3, 2, 1, pre-clinical and discovery studies in cystic fibrosis, inflammation, fibrosis, osteoarthritis and other indications).

Inhaled Levofloxacin (Quinsair) is used to treat Pseudomonas aeraginosa by blocking the Pseudomonas bacteria from making copies of its DNA and stopping its growth.

Quinsair has been approved by the European Union however the nebulized version is not available in England.  Quinsair is comparable to other inhaled AB’s Aztreonam, Tobramycin and Colistimethate.

Ceftlolzane (Tazobactom) is effective for treatment of abdominal/urinary tract complication and Ceftobiprole used in hospital and community acquired Pneumonia, MRSA and Pseudomonas aeruginosa

Dr Jones as confident the in the next two years we should see some new AB’s used in CF.

The main focus was on Micro Abscesses (A very small confined or limited collection of leukocytes, white blood cells, in solid tissues) and how important it is that they are managed.  This bacteria is well adopted to living in the extra cellular environment like water and soil.  It has adapted to be resistant to naturally occurring AB’s and more information can be found in a study by Bryant et al 2013 in the Lancet.

Micro Abscesses though uncommon spread rapidly – travel 4 metres and infective for longer than 24 hours on the surface as it keeps moving via air-surface-air.  They have been able to like two cases of infection back to a CF patient that was in an outpatient clinic 7 days earlier.  People with CF who are found to have micro abscesses are cared for outside of the CF units to prevent spread and the patient environment is terminally cleaned using a specific chemical following the persons discharge.

The new CF unit at Papworth hospital due to be completed in 2018 will have neutral pressure vent with 15 complete air exchanges per hour, which will prevent the asymptomatic human transfer.

Professor Hyde has been working in the lab looking at rSIV.F/HN enhanced respiratory gene transfer vector.  Prof Hyde has developed a virus which is effective after the first dose with Antibody, Fast cell entry and no T cell.  This virus has had no side effects noted when tested on mice and sheep.

At present the virus is very fragile so developing a way to deliver the virus to the lungs with a therapeutic dose has been difficult.  Prof Hyde is now at the stage of starting a small human trial of 24 subjects.  The delay is around his ability to make enough of the virus to treat all 24 via a nebuliser.  This is looking very promising and one dose has lasted over 12 months, so watch this space.

Quality of life measurement in children and adults with cystic fibrosis.

Dr Bryon was an avid supporter of patient reported outcome and the focus should be on the person with CF completing the Quality of life questionnaires themselves, if this is not possible then it should be stated on the form has been completed by a parent.

CF- Specific Quality of Life (QoL) measures should be used, different ones include EQ-5D (The EuroQol EQ-5D generic health index comprises a five-part questionnaire and a visual analogue self-rating scale QoL) and NICE (analytics & enabling organizations to derive value from data).  This focus on issues important to CF, account for multi-system, varying level of severity and takes into account for younger people.  Dr Bryon felt that if possible QoL measurement for people in Guernsey should be completed before they travel to Southampton because the stress of traveling my impact on how they are completed.

QoL measurement can be used as part of remote monitoring and Gee and Abbott CF QoL for Adults and Children were recommended along with CFQ.Revised formats. Dr Bryon also highlighted the need to speak to the child alone first then ask the family to join, as often the child will disclose more information about their perception differently when they are seen on a 1:1 basic.

I must admit I found this talk a little disappointing as it just covered what could be found on the website.

They believe that 99% of people with CF are on their data base.

They provide information about CF to patient and family.

They produce an annual report https://www.cysticfibrosis.org.uk/news/registry-report-2017

They provide a clinical care team with – Training, Reporting, Dashboard and outcomes.  They also provide custom fields.  The CF registry carry out their own research and have received 300 data request for clinical research.

They provide funding for CF centres depending on the level of complexity of the pt. for NHS England they have a banding levels 1 – 5.

The registry also write drug safety reports for drug company’s on their own drugs which generates income for the registry which they then use for CF centre grants.

The median predicted survival rate of people born with CF after 2012 is age 47, women have a life expectance 3.7 less than men but this gap is closing.

221 people were evaluated for a lung transplant last year.

Transplant is something the CFT is looking at in the coming years.

Patient Portal – My CF Registry is something the trust would like people to use through an access code from the centre.

It has QoL data.

Data linkage – Social Deprivation – Administrative – Remote monitoring via smart phone and Environmental factors they are even looking at consumer….? Spending habits/type of food purchased like a Tesco Card.